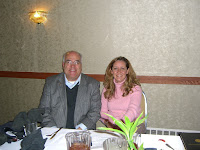 Amy Oliver spoke with us yesterday at the Denver South Optimists Club. She reviewed her study which has been published by the Independence Institute showing the extreme bias in the news coverage of Amendments C & D. 50+% of the coverage was Pro, only 3% Con in the Denver Post and Rocky Mountain News! “We’ve decided the best way to communicate with voters is to ignore the two major daily newspapers and focus instead on the small, local, community newspapers. People read them cover to cover, and they are more balanced in their reporting,” said Oliver. For the study see:
http://www.i2i.org/main/page.php?page_id=126

Since it is so likely that (today’s children) will meet cruel enemies, let them at least have heard of brave knights and heroic courage. Otherwise you are making their destiny not brighter but darker… (what they need are) companions for the common good.

MICHEAL FLAHERTY from a talk he gave at Hillsdale College. Micheal is the co-founder and president of Walden Media, which released its first three films—Pulse: A Stomp Odyssey, James Cameron’s Ghosts of the Abyss, and Holes—to both critical and commercial success in 2003. In association with the Walt Disney Company, it also produced the Academy Award-winning film The Chronicles of Narnia: The Lion, the Witch and the Wardrobe. This month it will release Amazing Grace, which tells the story of William Wilberforce and the movement to abolish the slave trade in Britain. http://www.hillsdale.edu/imprimis/2007/02/
Posted by John S Wren at 2/20/2007 02:12:00 PM No comments: Links to this post

Chris Phillips will be here in Denver this Friday, 7:30 p.m. at the Tattered Cover in LoDo. this interview with him was recently published:

DALLAS - Former teacher and journalist Christopher Phillips is the founder and executive director of the nonprofit Society for Philosophical Inquiry. In the 1990s, he developed the concept of the Socrates Cafe, in which people gather informally and, in his words, "ask questions - and questions about questions."

The author of three previous books, his latest, "Socrates in Love: Philosophy for a Passionate Heart," recounts his various "cafe" discussions around the world exploring five types of love: eros, or romantic love; philia, or friendship love; xenia, the love of strangers; storge, or family love; and agape, or unconditional love. He discussed his Socrates Cafe approach with Jeanette Leardi. Here are excerpts:

Q: How did you come up with the concept of the Socrates Cafe?

A: I first came across Plato's Socratic dialogues when I was an adolescent. I held my first dialogue when I was a junior high school student. In college, my political philosophy professor often took us after class to a local watering hole, where we'd continue with our discourses on matters philosophical until the wee hours. I loved that strangers often would sidle over and join in. I thought, this is what life is all about, great public discourse as a means of creating greater human connectedness.

But it wasn't till the mid-1990s, when Americans of diverse dispositions, it seemed to me, no longer engaged one another in healthy and respectful ways, that I decided to make a firm commitment to advancing this form of discourse.

Q: Why is Socrates relevant today?

A: Too many citizens of our open society have shirked their duty to actively immerse themselves in public issues and affairs. Socrates believed that it was incumbent upon each of us to be continually engaged citizens, that we must cultivate a type of constructive and healthy skepticism, questioning our leaders at every turn, lest they lead us down a blind alley or over a precipice.

By holding dialogues in the public marketplace or agora, he embodied the type of individual who invited all comers to take part, as a principal means of advancing democracy - and he did this at a time when people had become fearful of engaging in public discourse, of saying what was really on their minds. I think most of those today who take part in a Socrates Cafe-type discourse share his desire to advance the cause of democracy.

Q: What has surprised you most in the course of holding these Socrates Cafes?

A: I've facilitated and participated in thousands of Socratic dialogues, and it astonishes me that in all these years, every single dialogue - the participants pose and choose the question to be discussed - has featured a different question.

I'm also pleasantly surprised that we have so many groups. There now are more than 300, with more forming all the time, particularly since Sept. 11, 2001. Americans can be a pretty faddish bunch, and I'd thought that Socrates Cafe would be the "in" thing for a while, and then it would go by the wayside and the "next big thing" would take its place. But the momentum keeps building.

Where do you go from here? Do you have another Socrates book in mind?

I do have a few more Socrates books in mind, but I don't plan to write them anytime soon. Thanks to my Socratic inquiries, I've discovered other areas that intrigue me a great deal, such as the arena of political discourse, and I'd like to delve into them for a while.