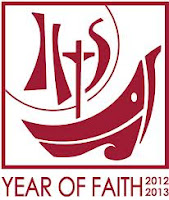 George Weigle talks in today's Wall Street Journal (click for article) about the qualities that will be needed in the new Pope.

Vatican II was the culmination of over a hundred years movement towards reaching out, the New Evangelism. Weigle says what hasn't worked is Catholic Lite, that building on a nominal foundation is what has just about killed the Church in Europe.

Thomas Merton started the conversion process in my own personal life, after I'd lost my faith. As a 9 year old kid, I'd gone forward to be baptized at University Hills Baptist Church. It's still a vivid memory being in the basement, sitting by my dad, praying, his eyes still closed when I responded to the call from the preacher to come forward. I learned from my mother much, much later that he hadn't been pleased at all, thought I was too young, soon after he took our family to a Methodist church, after I was married there he and mom and my brothers went to an independent church before settling in at a Presbyterian church.

Dad had four sisters, they were all Baptist, but as I understand it they all went to different branches of the Baptist church, seems like his mother went to a 5th branch, and none of them were at all sure the others were going to get into heaven.

I have two brothers, from how it looks to me we are all about like dad's family was, all going to different churches, all figuring the other guy is wrong. The apples don't drop too far from the tree, and not all on one side.

One of my favorite TV shows is Blue Bloods, my favorite scene is the Catholic family sitting around the dinner table. Those families that grow up in the same church have a big advantage.

Today is Ash Wednesday, the beginning of this 40-day liturgical period of prayer and fasting. Of the 46 days until Easter, six are Sundays and Sundays are considered "feast" days during Lent. It's observed by Catholics, Lutherans, Episcopalians, and Methodists. But not at the Methodist Church we attended, at least not by dad.

I've wondered what life might have been like for me if we'd stayed at that Baptist church, and it hadn't been Baptist/Methodist/Unitarian/Congregationalist/Atheist/Presbyterian/Lutheran/Episcopalian/Catholic for me and my poor kids.

It was a surprise a couple of years ago when a friend died and his funeral was at that Baptist church, it felt like coming home. I really started to wonder if it might make sense to go back. That's no longer a possibility. I drove by recently, it's been torn down. Ash Wednesday reminds us that's what happens to us all eventually.

Before dad died I realized he'd never talked about his dad. "I guess I resented him," he told me from his final of a long series of hospital beds. "I always thought my life would have been a whole lot easier if he'd fought it a little harder."