It was on this day November 15 that 35 years ago this evening that pop passed on, 10 years after selling his business to NMS Industries.

He'd been fighting cancer for years, but suddenly that summer of 1979 it took a turn for the worst. Much worse.

"Don't worry honey, we're going to whip this," were his last words to mom. She and I and the Smith's and Cearly's were standing around his bed when his breathing changed and then very suddenly stopped all together.

In one of my last talks with pop I asked him why he'd never told me anything about his father, who had died we were told when pop was only 9 years old. "I guess I always resented him. I was just a little guy when he died, and my life would have been a lot easier if he'd fought it a little harder.


Pop married the prettiest, most popular girl in his high school, built and sold a successful business, developed a small shopping center and always earned a good living for him self. He served on the board and then became president of the national trade association for his business (this picture taken for their 1969 annual directory.) He built a house in Amarillo just after WWII which they sold to raise money for the business he started in Colorado. He built a house in Aurora, Colorado, another in University Park, and another in Devonshire Heights. Just before he passed on he and mom built the condo we've just sold after mom passed on to join him September 20.

He had a lot of good  friends, several he'd stayed in touch with since high school. He loved his family, playing catch, going to school events, gardening, especially rose gardening, pheasant hunting, fishing from his boat on Lake Granby, God, his mother and sisters and their families, mom, and he especially loved this great country, the United States of America, where a poor boy from a small town could make something out of his life. He was proud that all 3 of his sons graduated from the University of Denver. He hated paying so much in  taxes, especially inventory tax.

He dreamed of buying an RV and traveling the country with mom, and also of starting a foundation to give a hand to others who, like him, had lost their father at a young age.

Today medicine has advanced and the prostrate cancer which finally spread and took him would most likely be treated for full recovery and he'd have had 30+ more years, who know what he would have accomplished. 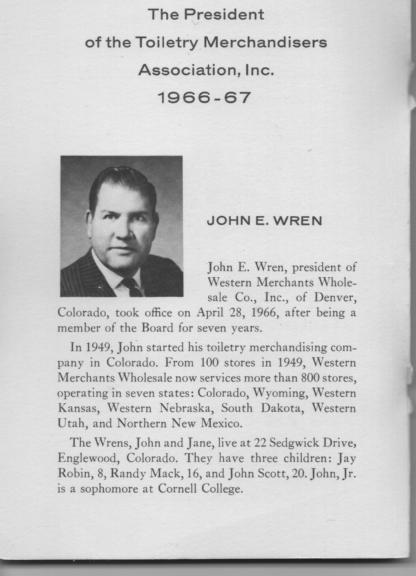 If you are starting a new career, a new project or campaign, or a new business check out the Small Business Chamber of Commerce, Inc, (click here for website).

Since 1979 we've been helping people who are starting in a new direction with their work. Since 1727 if you go back to when Ben Franklin started what we consider our first meeting, what he and the others called the Junto, what we call today a Franklin Circle.

At any of these you'll see a link to a sample of our online Friday morning The Startup Show, hope you'll mark your calendar and watch live then or visit anytime for a recording of the show.
Posted by John S Wren at 11/11/2014 09:22:00 AM No comments: Links to this post