Rocky Mountain News: Election: "Why are you running for this office? The theme of my campaign is the prodigal son, the fact we can all choose to serve. In my campaign I will: 1) Talk about my friend Stephen Meyer's (Rationally Right) new Robin Hood Republican political movement (see www.RobinHoodRepublican.com), the idea that people of differing political mindsets are often unable to understand each other; and 2) Encourage people to prepare for their neighborhood caucus in 2006 through participation in Socrates Cafes (www.philosopher.org.) and Franklin Circles."

Post Modern Christianity: The Future of the Church and Post Modern Ministry in the 21st Century: "Though each group fervently believes the other has 'missed it'--though each group believes they are history's 'chosen ones'--though each group plots the destruction of the other ('in the name of love and compassion,' of course), both groups have been firmly rejected by the postmodern world.
The unchurched masses, for example, are not impressed by 'hypocrisy in religious poses.' They are not moved by 'money and power in pious garbs.' And they are not affected by 'empty pieties within worn-out traditions.' Their disinterest has even turned menacingly toward a dislike of the church. The more rebellious ones, for example, insist that 'faith in God is not only out of date, but (even) dangerous.'(1)"

FasTricks? I just received this from my friend Dan Kopleman:

Not only do the FasTax Yes people have $3 million to spend on supporting a 67% tax hike, but they feel the need to cheat on the voter information guide too. If it is such a great idea, why does it take lies and coercion to getpeople to support it?

If you'd likeke to save a few thousand dollars in taxes over the nextdozen years, make a contribution to Taxpayers Against Congestion athttp://taxpayersagainstcongestion.org. A small contribution will to a longway.

Top Ten Reasons to Vote "No" on FasTracks, Measure 4A

10. Because FasTracks is corporate welfare. Why should Denver increase a regressive sales tax whose only real impactwill be to make wealthy businesses even richer?

9. Because it won't relieve congestion.DRCOG says FasTracks will take only 1/2 percent of cars off the road, only1.4 percent of rush-hour traffic off the road, and increase rush-hourtraffic speeds in FasTracks corridors by less than 1 mile per hour.

7. Because buses are faster, better, and need no new taxes.RTD says bus-rapid transit can go 51 miles per hour, operate more frequentlythan any rail line, and still cost less per passenger.

6. Because you shouldn't mortgage your children's future just to take anoccasional train to the Rockies game.DRCOG says the average Denver-area resident will ride FasTracks just 6 timesa year in 2025. Yet taxpayers will pay $24 to subsidize every new ride,partly because of the $3.65 billion in finance charges on the debt requiredto build Fastracks.

5. Because "we have to do something" is not a reason to do something stupid.FasTracks supporters point out that the Denver area is expected to gain 900,000 more people by 2025. But DRCOG says FasTracks will attract only72,000 new transit rides a day in 2025, which (since most rides are roundtrips) means just 36,000 people.

4. Because a world-class folly does not make a world-class city.New York is a world-class city and has rail transit. But people go to NewYork to see a Broadway play, Rockefeller Center, and the Empire StateBuilding, not to ride the subway. Do you think millions of tourists willcome to Denver just to ride a 24-mile-per-hour light-rail train?

3. Because the most important lesson of 9/11 is "Don't bunch up."The most significant terrorist act of the last two years was the bombing ofa train. Do we really want to make Union Station a target for terrorists?

2. Because a choice you can't afford is no choice at all. FasTracks supporters will reluctantly admit that FasTracks won't do much toreduce congestion, but say it will give people a "choice." But that "choice"will require billions of dollars of capital subsidies plus tens of millionsof dollars of annual operating subsidies. A fraction of this money could domore to reduce congestion if it were spent on things such as traffic signalsynchronization, bus-rapid transit, and high-occupancy/toll lanes -- leavingthe rest in the taxpayers' pockets.

1. Because it costs too much and does too little.Is it really worth $8.3 billion -- enough money to buy every Denver-area family a new car -- just to get 1.4 percent of cars off the road during rushhour?

I’d love to be able to get around Denver without a car, wouldn’t you?
So I want to be for FasTracks.
But after spending lots of time researching it as part of my campaign (I’m on the ballot for House District 5), what becomes clear is that FasTracks won’t really help the average person like me get around, it help traffic congestion, and it certainly won’t help the poor. And it continues the upward spiral of our out of control sales tax. “I’m with Daddy Bruce,” someone said to me. “If they are going to put on more for FasTracks, they should have to take something off.”
Gov. Bill Owens recently came out against FasTracks. The Rocky Mountain News has called it “an ugly tax-and-spend initiative…the Regional Transportation District’s plea for a major hike in its sales tax.” Everyone from my barber to my former finance professor at D.U. is against it. Any objective person who takes a close look at the facts will vote no.
If it is such a bad idea, why is it ahead in the polls? Because those supporting FasTracks are highly motiviated by the economic or political payoff for themselves. Landowners along the proposed lines, developers, financers, consultants, government bureaucrats and politicians, along with those who like to go to their parties, have pumped big-money and time into a slick campaign.
Unless we citizens become energized, this kinds of sledge-hammer, direct democracy cons will keep getting pulled.
One-sided initiatives like FasTracks are no different than robbing a 7-11; the criminals just dress better and they use TV commercials instead of pistols.
I helped fight back against one of these cons a couple of years ago, and perhaps my experience then will be useful to us now.
Here is what I learned in the elections of 2002:
Colorado’s unique caucus-assembly system, one of the ways we Coloradoans nominate to the primary ballot, has a long and distinguished history.
One of the most interesting episodes, at least to me, was in the fall of 2002 when a power-grab to destroy it was thwarted by a group of our finest citizens.
I’ve been given far too much of the credit for the defeat of Amendment 29. An editorial in the Rocky Mountain News said, “Despite having virtually no money to spend, John Wren helped lead the successful opposition to a well-funded Amendment 29, which would have abolished Colorado’s caucus system.”
Here are the facts about how that citizen effort, Save the Caucus started and how it beat back the forces that tried to Squash the Caucus. For information about what some of us from that effort are doing today, see www.orgsites.com/co/cocaucus.)
Jo Anne Gray, a former Republican National Committee Woman, called me soon after the Denver County convention in May, 2002.
She and Sharron Klein, then and current Denver Democratic Chair, had both written letters to the editor about the initiative to squash Colorado’s neighborhood caucus. This was the initiative Rutt Bridges was then threatening to get on the state-wide ballot, and that he ultimately did in the form of Amendment 29. Jo Anne and Sharron both had written letters to the editor after seeing Bob Ewegen’s editorial in the Denver Post April 20, 2002. (To see the text of their letters and the editorial, go to www.orgsites.com/co/cocaucus)
After seeing Sharron’s letter, Jo Anne had called her and they had agreed something would need to be done to stop the Rutt Bridges’ initiative if it made the ballot.
With that conversation fresh on her mind, Jo Anne took note of a flier I distributed. The flier was a reprint of the same Bob Ewegen editorial in the Denver Post in support of the caucus with the question, “Should we do anything about saving our Colorado caucus system? Read this, and if you think we should, contact John Wren” and it gave my phone number.
When Jo Anne called me we conferenced on Sharron, and the three of us agreed to have an organizational meeting. At the first meeting Polly Baca and Jo Anne agreed to act as temporary Co-Chairs as we got started along with Frank & Sylvia Sullivan, Phil Perington, Darryl Eskin, and Dick Wadhams.
After our first meeting Amendment 29 made the ballot.
We quickly had a second meeting and decided to call ourselves Save the Caucus. Committees were formed, and we began our work. Darrell Eskin agreed to create a Save the Caucus website which I really do believe was one of the keys to our success. Phil Perington and myself were the media contacts, and we made a news release announcing the formation of the group. The Colorado Statesman featured the release in the issue that was distributed to the State Assemblies of both the GOP and Dems on June 1st, 2002.
Under Phil Perington’s and Ruth Prendergast’s able leadership, and with a very strong core of volunteers including Jo Anne and Sharron, Frank & Sylvia Sullivan, Dick Sargent, and many many others, the committee was able to engineer the ultimate defeat of Amendment 29 60% to 40%, a crushing victory against the overwhelming disadvantage of being outspent 1400 to 1!
With today’s technology, common, everyday, ordinary citizens like me and you can fight back. If fax machines could bring down the Berlin Wall, we can bring down FasTracks! Contact me today if you’d like to help! It is only too late if we don’t act now! (Clip, photocopy and distribute this to your like-minded friends and neighbors!)

JibJab.com Take a look at Jibjabs new "Good to be in DC", very funny! 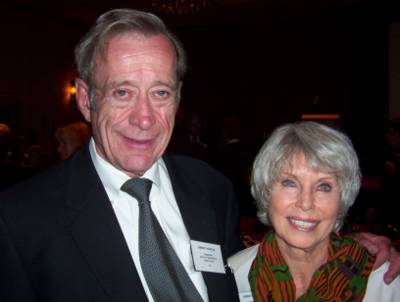 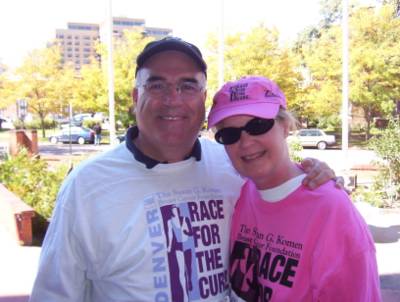 Mary Clement and I after our 2nd Race for the Cure together last Sunday. 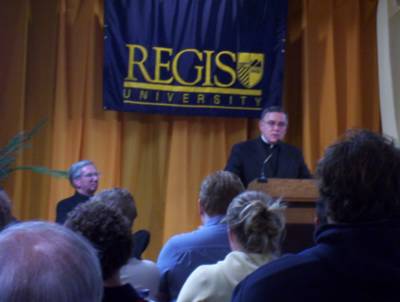 Archbishop Chaput talked about the importance of Faithful Citizenship in a talk at Regis University. 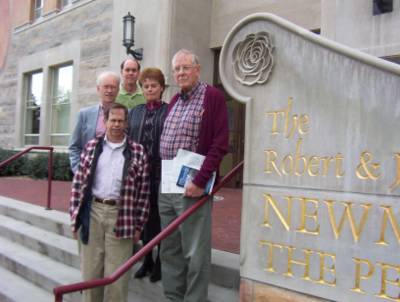 David Aitken and Bill Robinson announce their Libertarians for Wren at the University of Denver, joined by Mike Nelligan, Denver County GOP Chair, Barbara DeGrote, Bush 2004 Denver Chair, and Steve Meyer, author of Rationally Right. After the announcement we all heard Hernando de Soto talk about his new book, The Mystery of Capitol."