Rocky Mountain News: Columnists: "'When politics doesn't involve our deepest convictions, it is only about money, only about power, only about ego.'
'On Judgment Day, there will be only one question, 'What did you do for the least of these?' '"
Posted by John S Wren at 10/16/2004 06:25:00 AM 1 comment: Links to this post

Bush's Remarks at Colorado Springs Rally: "And after the war, Harry S. Truman, president of the United States, believed in the transformational power of liberty to convert an enemy into an ally. That's what he believed. So did a lot of other Americans. But there was some great skepticism of what that could mean. You know, remember we were working for democracy in Japan. A lot of people in this country said, 'Why do it? Why bother? Why should we care? They're the enemy.' You could understand. Families' lives had been turned upside down because of the death of a loved one during that war.

People were questioning whether or not it was worthwhile.

But fortunately, they believed in the power of liberty, and today I sit down at the table with Prime Minister Koizumi, the head of Japan, talking about the peace, talking about how the United States and Japan, former enemies and now allies, can work together to achieve the peace we all want for our children and our grandchildren."
Posted by John S Wren at 10/14/2004 05:48:00 AM No comments: Links to this post

The Long Way Home Project: "During the period 1964 until 1975 over 2.59 million American servicemen and women served their country in the Vietnam War. 58,202 made the ultimate sacrifice.

The Long Way Home Project is dedicated to their families and to all those who have risked everything for the cause of freedom and democracy."

this documentary series is being shown here in Denver on KBDI Channel 12 this Saturday Oct 16th at 8:00PM. Please pass this notice on to all that you think might be interested.

Email ThisBlogThis!Share to TwitterShare to FacebookShare to Pinterest
Inc.com | The Origin of the Entrepreneurial Species: "Inc. : So much of your research focuses on the difference between ordinary start-ups and those gazelles, or 'promising companies,' that go on to achieve significant levels of success. Could you give us an overview of how successful companies get started?
Bhide: Here it is in summary: Most successful entrepreneurs start without a proprietary idea, without exceptional training and qualifications, and without significant amounts of capital. And they start their businesses in uncertain market niches."
Posted by John S Wren at 10/13/2004 10:39:00 PM No comments: Links to this post

REMARKS BY THE PRESIDENT AND GENERAL TOMMY FRANKS AT A VICTORY 2004 RALLY October 11, 2004 Red Rocks Park and Amphitheater Morrison, Colorado

GENERAL FRANKS: Thank you. What an absolute honor to be here in this beautiful, beautiful place. And, you know, I guess I'd have to say,from the level of enthusiasm that you people are showing right now, I think victory is headed our way. (Applause.)

And I am so honored to introduce my former boss, President George W.Bush. (Applause.) You know, George W. Bush is the real thing.(Applause.) I have seen this President close in his eyes when it was notconvenient to be the President of the United States. I have seen thisPresident, this Commander-in-Chief, when the nights were long and themornings were early and the decisions to be made were hard. And you knowwhat I saw? I saw character, I saw courage and I saw consistency.(Applause.)

I saw the character that is necessary. I saw the character in hiseyes that is necessary not to tie, but to win against the terrorists.(Applause.) And ladies and gentlemen, ladies and gentlemen, this is goingto be a close election, and every vote matters. And it matters more to young men and women who wear the uniform of service of our country.(Applause.) It means more to them then at any point in my lifetime. And I will do everything I can to be sure that the Commander-in-Chief who is giving the orders to our sons and daughters is the Commander-in-Chief we have enjoyed over three tough years in this country, and that's George W.Bush. (Applause.)

It is my honor and it is my privilege to introduce the next Presidentof the United States, George W. Bush. (Applause.)

Tommy and I were both raised in Midland, Texas. He went to AlamoJunior High, and I went to San Jacinto Junior High. So we're standinghere, and he says to me, this doesn't look like where we were raised.(Laughter.) What a beautiful part of the world. Thanks for coming out to say hello. (Applause.)

I've come back to this beautiful part of our country to ask for the vote. (Applause.) And I'm here -- I'm here to ask for your help, as well. We're getting close to voting time here in America. And I'm asking you toget your friends and neighbors to go to the polls. I'm asking you to find people from all walks of life to vote. As you get people to go to the polls, don't overlook discerning Democrats. (Laughter.) Like you, they want a safer America, a stronger America, and a better America.(Applause.) There is no doubt with your help, we'll carry Colorado again and win a great victory in November. (Applause.) 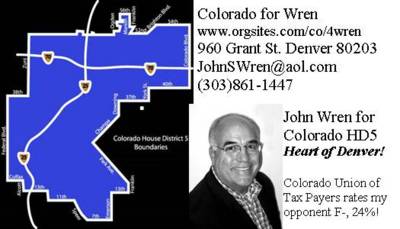 Email ThisBlogThis!Share to TwitterShare to FacebookShare to Pinterest
The New York Times > Washington > Campaign 2004 > Religion: Group of Bishops Using Influence to Oppose Kerry
The Rev. Andrew Kemberling, pastor of St. Thomas More Church near here, said he agreed with the archbishop (Chaput), but he acknowledged that parishioners sometimes accused him of telling them how to vote. He said his reply was: "We are not telling them how to vote. We are telling them how to take Communion in good conscience."

A physician proposes a solution for the excessive use of alcohol on Colorado's university campusesRocky Mountain News: Opinion: "Treatment must start early and intensively in the academic year. It must focus on the population most at risk: freshman and sophomores. But rather than tinkering with the content of courses, the serious changes would be these: Move up both the timing of the initial assessment of students, and hold students accountable for their performance.
We are creatures who focus on short-term consequences. The game is lost if we wait until mid-terms to introduce a survival ethos. Launch the testing and grading process in the first two weeks. Make it clear - make it unmistakable - that there will be consequences and accountability.
Send the early grades to the student's parents. No doctor would wait until the patient was ready to leave the hospital before giving the family a progress report. Every freshman student should have a faculty adviser, and those assuming the burdens of this job should include the president and vice- presidents, chancellor and vice-chancellors."
Posted by John S Wren at 10/11/2004 05:21:00 AM No comments: Links to this post