Mike Rosen recently discussed patriotism in his Rocky Mountain News column, and it has stimulated lots on comments. http://www.rockymountainnews.com/news/2008/jan/18/rosen-the-virtue-of-patriotism/ Here's my comment:

I'm going to suggest patriotism as the topic at our next Thursday evening Socrates Cafe. Free and open to all. More info and RSVP at http://socratescafe.meetup.com/82

I've repeatedly invited Mike Rosen to join us at the Denver Socrates Cafe, he seems to have no interest in what we are doing. Might be for the best; people who aren't open to listening and new learning, who come only to impress their ideology on others, usually are very frustrated when they are suddenly confronted with a level playing field.

But I'll try once more: Mike, how about joining us next Thursday? You can RSVP and plug your radio show, newspaper column, scheduled speaking engagements, etc. if you want in the RSVP comments. More info and RSVP at http://socratescafe.meetup.com/82
Posted by John S Wren at 1/19/2008 09:03:00 AM No comments: Links to this post

Are you planning to attend either a Democratic or Republican caucus in Colorado on Feb. 5? Or are you an unaffiliated, but politically active, voter who wishes you, too, had a say in winnowing the presidential field? If your answer is yes, we'd like to hear from you. We're looking for men and women of all political stripes to profile in stories about election excitement. Send an e-mail with "Caucus" in the subject field to chewlings@denverpost.com. And please provide the information requested below.

Give us your views E-mail your name, phone number and political affiliation to chewlings@denverpost.com.
Posted by John S Wren at 1/18/2008 07:33:00 AM No comments: Links to this post

Email ThisBlogThis!Share to TwitterShare to FacebookShare to Pinterest
On this day in 1964 - Plans are revealed for the World Trade Center in New York City. 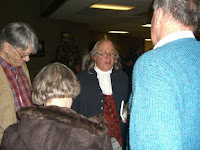 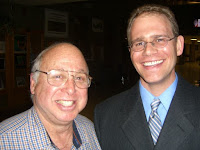 Yesterday we celebrated Ben Franklin’s 302nd birthday at North High School here in Denver. Here’s Chris Lowell aka Ben Franklin(www.BenFranklinLive.org), a video of who’s powerful endorsement of the Colorado Caucus, shot by my brother Jay, will be posted here soon. Ben's here in costume at intermission from “An Evening with Ben Franklin”, and then Chris out of costume with Joel Cannon who represented Ron Paul in the talks before the Presidential straw poll. Ron Paul supporters turned out in force and won the straw poll contest between all Democrat and Republican candidates by an almost 3 to 1 margin over the nearest competitor.

Are you going? I'll be there.
Friday, January 25, Independence Institute, 13952 Denver West Parkway, Suite 400
Golden. Hear former Denver Public Schools Superintendent Dr. Jerry Wartgow
share some of the perspectives featured in his new book
Why School Reform is Failing and What We Need to Do About It.

From a New York newspaper column yesterday: It bothers me that there is no particular national celebration of (Ben Franklin’s) birthday. Oh, someone will probably mention it — probably in a political “elect-me” speech — and maybe a history teacher will comment about it, and, at some place which is named for him — a “Franklin” School or a “Franklin” something-or-other — will make a minor matter of it — but it won’t be a big celebratory issue. That’s too bad, considering the impact that the man had on every part of modern life.

In an age when the political leaders generally came from wealthy families, Ben was born into a modest, though hard-working family of candle-makers. As Ben was the tenth son in his family, his father decided to “tithe” him to the church, so he was enrolled in school. After two years, Ben’s father realized that there was no money in the ministry, so he withdrew him. Ben, therefore, was certainly not the institutionally-generated person whom we expect in politics, today.

The Denver Post is about to launch a new online forum for people to report on their local neighborhood caucus. Watch here for details or go to www.PoliticsWest.com.

What you are reading now, www.JohnWren.com, is one of the longest running blogs in the country. What would it take to get the Denver Post to add it to their listing of political blogs?
Posted by John S Wren at 1/18/2008 06:12:00 AM No comments: Links to this post

Colorado's caucus system dates to the late 1800s, according to Bob Loevy, a Colorado College political science professor, but it has evolved over the years. Colorado Independent

We've had good publicity for this event, it's the headline story today in the North Denver Tribune, the Denver Daily News and the Colorado Statesman Newspapers have ads in their current issue. Get your ticket online now, save money, and join Ben & me tonight at North High tonight to celebrate his 302nd birthday! 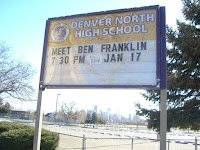 North High here in Denver is really getting behind the Optimist's An Evening With Ben Franklin & Presidential Straw Poll. This is going to be a fun evening! To get the details and RSVP, click the link to the left.

What would Ben Franklin think about the Colorado Caucus?

In the latter part of my life, I wrote somewhat wistfully of how wonderful it would be to return to America two or three hundred years hence to see how our Republic was faring. Remarkably, I WILL be able to make such a journey through time, thanks to the Optimists, North High School, and Citizens John Wren and Christopher Lowell, who will bring me to your city of Denver on my birthday, the Thursday, January 17 at North High School.

When, after over four months of strenuous effort, we delegates emerged from our Constitutional debates in Philadelphia that hot summer of 1787, the wife of the Philadelphia mayor greeted me with the not unexpected question "What kind of government have you got for us, Dr. Franklin?"

I answered, "A Republic, madam, if you can keep it."

And only by the vigorous debate of issues and candidates for public service, only with the participation of us all can we truly keep the Republic we Founding Fathers so carefully crafted.

It is not for the elite but for all citizens to hold our public officials accountable to us and to continue to make government a servant of the
people and not the other way around.

The full flowering of this Republic of ours is your Colorado Caucus, which will once again be celebrated February 5. Every two years citizens of Colorado have this opportunity for a state-wide civics lesson, and I applaud that effort to reach out to and educate new citizens.

Political parties were unknown in our times, but I understand that now political parties choose delegates representing your views as you prepare to vote in presidential elections. And, more importantly, you, in keeping with the ideals we embodied so long ago, each and every one of you, has a voice in choosing these delegates through your Colorado Caucus.

Even today, your government is not formed by an elite, but by you, the ordinary citizens of the land. I applaud this! After all, I was the son of a simple candle and soap maker, and always proud to be of the "middling class," the "leather aprons" as we called ourselves.

It was to throw out the concept of elite government and to place our faith in the people's will that we created our Republic during the Constitutional Convention of 1787. Now, 200+ years later, you still have the opportunity, through your Colorado Caucus, to continue to create a government responsive to your needs and wishes. Few nations give their citizens this trust and this power! I urge you to take advantage of this and become engaged in the exciting process of charting your own destiny and your children's future!

I am eager to see you all in Denver and delighted to discuss my life and times with you good citizens and take your questions later this week. Until then, I remain, your faithful, and obedient servant,