Socrates Cafe at University of Denver 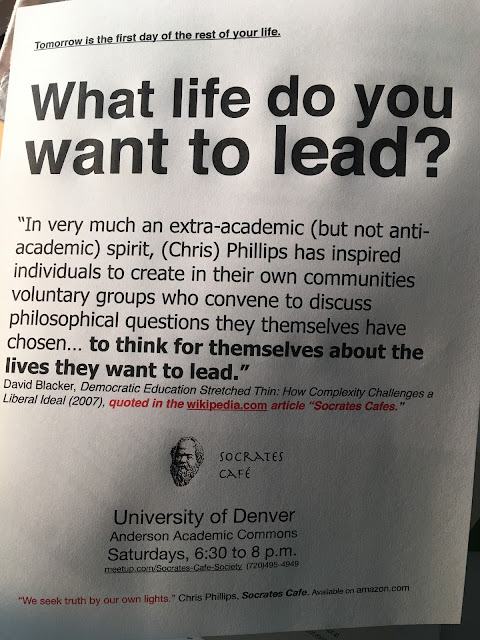 Hurricane Harvey was bad, wait until you see Hurricane Colorado, it will hit us in the 2018 elections, gain power and circle back in a 2020 disaster.


Unfortunately, Propositions 107 and 108 (They were 140 and 98-) both passed.
This morning Facebook reminded me that I'd posted this video a year ago after Propositions 107 and 108 (They were Propositions 140 and 98 until they got enough signatures to get on the ballot, then powerful elitists change numbers when they go on ballot, just one more way they dupe the grassroots, make it harder to stop their Hurricane Colorado) both got enough signatures to make the 2016 ballot.

I couldn't get anyone substantial (meaning rich enough to underwrite a real campaign against 107/108's task force of elitist backers, CEOs, silver spoon trust fund babies who were born on third base and think they hit a triple, tenured poly-Sci professors who hate the grassroots, and the worn-out, cynical party workers who can't stand passing the torch to the younger generation, creatives without a conscious) to oppose the misleading ad blitz, saturation TV ads and direct mail that appealed to young adults with sophisticated, subliminal triggering of memories of red and blue t-shirts and being bullied on the school play ground.