Long-time community activist John Wren announced today a new campaign to strengthen the grassroots. "If we are successful it could have a big impact on the 2020 elections and beyound," said Wren. He promised a media advisory each Thursday to track progress. "For more information please call me at (303)861-1447.

Small Business Chamber of Commerce, Inc is a Colorado not-for-profit corporation. Wren is the founder and serves as the current President. 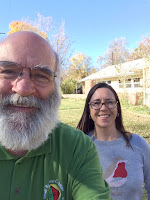 Have you seen this yet? Going on Thanksgiving?

A Love Letter-- In the beginning.

It was the best.

It was the worst.

It is still the best and the worst. It's always that way. The very best, nothing better, always has some of the worst in it.

It all began when Janet and I took the train to Chicago just before Thanksgiving in 1964.

It was our senior year, our football team had just lost our last game of the season, if we'd won, which we should have, I'd be staying to play in the playoffs for the state championship.

The entire TJ (Denver Thomas Jefferson High School) yearbook staff was being chaparoned by Mrs. Shapiro (Sandy's, the editor's, mom) and Mr. Art Mason, an English teacher and the yearbook sponsor for the 4th time; he and dozens of students had been documenting the school since the Fall of 1960 when it was written up in Life Magazine, it opened as part of the space race spawned by the Russians launch of Sputnic.

All this comes to mind right now, as it has every year at this time, today is the 55th Sunday before Thanksgiving, because my annual memories of getting to know Janet on the trip to Chicago, the best, also marks the worst, the aniversary of my going to war with 8 of my team mates and their defenders, a fight that went public and eventually involved the Denver school board, who eventually made a decision with my future father-in-law protesting their meeting (captured in the Denver Post) and the superintendent of Denver Public Schools.

For years I'd read through the letters that were sent to me by friends and strangers encouraging me to keep fighting. I eventually kept them in a gold box that got thrown away when Janet and I divorced.

This year, I'm going to write this. For better or worse.

My next post here on JohnWren.com will be a love letter, here's why:

Next to Pop's death the 3rd biggest event in my life, other than Janet and I marrying in 1967 and the births and lives of our 4 kids, happened the Monday before Thanksgiving in 1964, I'll tell you more in my next post here, I'm about to write a love letter inspired just now as I did these 3 things below I've share with you on Facebook.

Would you help me? If you take what I've posted below seriously and actually do the 3 things that are suggested yourself, I'd be very, very interested in the results you might obtain. PLEASE call me or see me at one of our free SBCC meetings and let me know if you'd rate the below 3-steps on Rotten Tomatoes, if it's a 9 or 10 let me know with your comment here, otherwise call or email your rating and suggestions to me, ok? John Wren  John@SmallBizChamber.org