Colorado Symphony Orchestra: "Jeffrey Kahane, music director of the Los Angeles Chamber Orchestra (LACO) and the Santa Rosa Symphony (SRS) in northern California, has been named Music Director of the Colorado Symphony Orchestra (CSO), " Lots of great CSO performances this summer. Free concert tonight and tomorrow night. I went to the wonderful Sloan's Lake free concert Thursday evening, reasonable turn out. SCFD likes to take the credit, but these free summer concerts existed before SCFD. The fact is the free concerts and discounted tickets are great ways to do audience building for the regular season.

Rocky Mountain News: Entertainment The question voters should be asking about the SCFD is: are the arts better off now than before the SCFD. I recently went to the the wonderful CSO concert conducted by Jeffrey Kahane, the new Music Director. The hall was half empty. It seems to me the SCFD creates an Indian reservation for the arts, so the organizations that have grown to depend on it pull back from the audience building and fundraising that knits them into the community. But with the strong million-dollar promotional program that is planned and no organized opposition it seems there is no possible way for there to be reasonable discussion on this issue. Perhaps we can in District 5, and I'm certainly open to the possibility that I'm mistaken on this issue. What do you think? Do you have solid evidence that the arts in Denver are more available to the average person than before SCFD?

Rocky Mountain News: Business I have a bias against large discount stores because they put my father's wholesale company out of business as the mom & pop grocery stores disappeared 30 years ago, replaced by King Soopers and Safeway. Now these giant Wal-Mart stores are doing the same thing to Kings and Safeway. As consumers, we benefit from the lower prices. But clearly, we are becoming a nation of clerks, working for giant companies, rather than the nation of shop keepers we once were.

What's the solution? First, stop corporate welfare. Government at all levels should stop giving tax-breaks and other incentives. Second, level the playing field by stopping unfair price breaks in advertising, lease rates, and intrest payments except where they are justified by actual costs. Where there is true economy of scale, these breaks should not be needed. We need a Teddy Roosevelt trust-busting approach to the government-corporate connection, the cancer that is destroying America. Protests against individual Wal-Mart stores doesn't get to the true root of the problem. 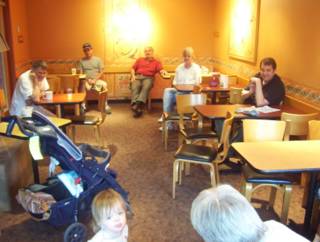 Socrates Cafe meets each Friday, 6 p.m. at Panera Bread, 1350 Grant St. here in Denver. Tonight we discussed the role of childhood awe and wonder. Kendall stopped by with her mom to pick up her dad. 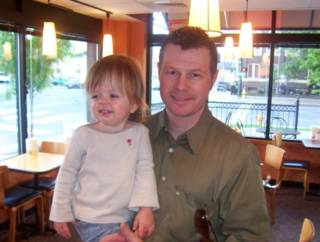 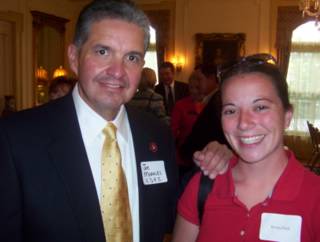 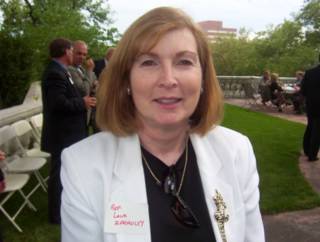 Rep. Lola Spradley, Speaker of the House, told me about the importance of her initiative to make sure providers of alternative power have a market for their product. http://www.coenergy.info/resources/briefingbook.pdf 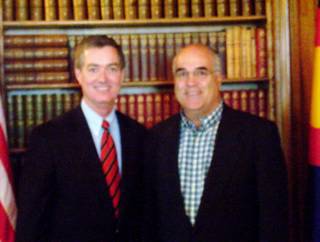 Gov Bill Owens invited all GOP candidates to meet with he and his staff this afternoon for a policy briefing and BBQ at the Governor's Mansion. We each got a portrait taken for use in our campaign literature. 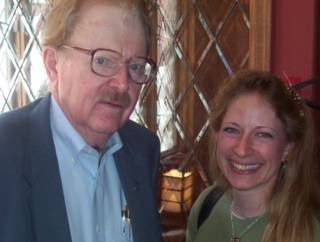 After encouraging Coors to drop out of the race, I went across the street to the Denver Press Club. Talked with Jean Toole, who with my old neighbor Lyle Lindesmith discovered and developed John Love as a candidate for Governor. Jean and I discussed putting together a recognition dinner for Lindesmith this fall, before he introduced me to Che' Rippinger, the new Administrative Assistant to Ed Otte at the Colorado Press Association. Check out her very funny writing and cartoons on www.datingandhandgrenades.com. 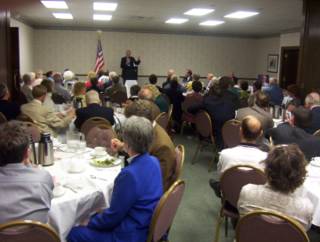 Pete Coors at Lincoln Club luncheon, Denver Athletic Club, says, "Look on the Senate's website, there are 50 tax bills pending right now, I don't know how anyone can go back to Washington and make sense out of it all." Coors criticized Bob Schaeffer for being a politician. I suggested that maybe it takes a politician to go back to Washington and actually get anything done. Coors said he'd have staff to help him. Wouldn't it make sense for Coors to unite with Schaffer now? Primary has been helpful, but it is clear to nearly everyone I talk with who is not on Coors paid staff that he is not going to win the primary election, and that Bob Schaeffer is the GOP's best hope against the Dems this fall.

Rocky Mountain News: Opinion The Denver Chamber of Commerce is backing the SCFD (Scientific and Cultural Facilities District) and Fas Tracks. Are these really best for Denver? What do you think? I'd be very interested in your opinion as I decide what issues to focus on in my campaign for HD5.

USA TODAY Archives Search The SBA tries to scare people out of starting their own business by saying only 1 out of 10 businesses are successful; their own research says 67% are successful.

DenverPost.com - National Politics Bill Owens is going to help write the GOP platform. When I meet with him this afternoon I'm going to suggest a radical overhaul of the Small Business Administration and the venture capitol model of startup it preaches. Formed in 1954, the SBA approach to business startup has just about killed entrepreneurship.

The New York Times > Opinion > Op-Ed Columnist: Kerry's Cruel Realism "The Varela Project happens to be one of the most inspiring democracy movements in the world today. It is being led by a Cuban dissident named Oswaldo Payá, who has spent his life trying to topple Castro's regime. Payá realized early on that the dictatorship would never be overthrown by a direct Bay of Pigs-style military assault, but it could be undermined by a peaceful grass-roots movement of Christian democrats, modeling themselves on Martin Luther King Jr." One of the rights being demanded by the Varela Project is the right to start a small business. Do we have that right here in the U.S.A. today? 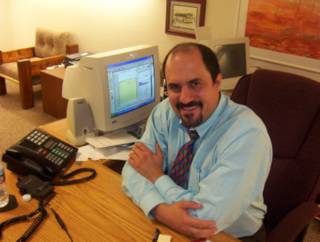 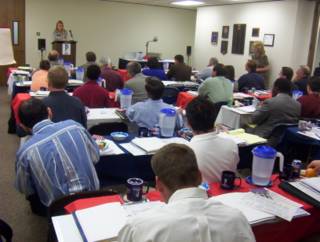 Jessica Peck Corry explains restrictions on freedom at the University of Colorado, what students are doing to fight back.
Campaign Theme/ Prodigal Son 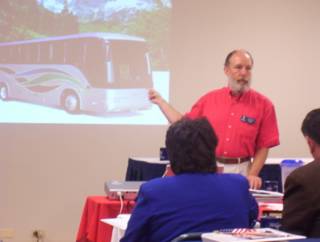 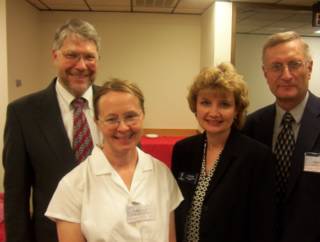 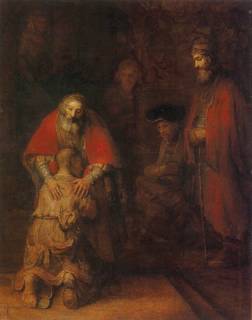 In case you missed it, here is the newsrelease announcing my candidacy for District 5, updated with this new Wren's Journal address:

John Wren announced today that he has accepted the Republican nomination for downtown Denver House District 5 for the primary election that will be held in August.

Making the announcement, Wren said, “This campaign is a test. Two years ago the candidates for this office spent about $250,000 or about $6 for each registered voter in the district. This extravagant spending on campaigns has eliminated running for elected office as a possibility in the minds of most common, everyday people like me.

"The theme of my campaign will be the prodigal son (photo attached) the fact that none of us is perfect, and that we are all are called to amend our lives. GK Chesterton once said that the reason we are commanded to love our neighbor and to love our enemy is that so often they are the same person. I challenge other candidates in this race to use this campaign as an opportunity for community building.

“My campaign will test the idea that it is still possible for a person of limited means to be elected. I'll be holding meetings to meet my neighbors frequently, those who would like to attend should contact me via email at JohnSWren@aol.com or (303)861-1447. A blog is under construction at http://wrensjournal.blogspot.com/."

Wren is a business consultant, adult educator, and long-time community activist. He helped organize Save the Caucus which defeated Amendment 29, which was intended to eliminate the process which gave Wren this nomination. He organizes and facilitates adult learning group, see www.orgsites.com/co/poorrichard. For more information contact him at JohnSWren@aol.com or (303)861-1447.

HBO Films: Everyday People I saw a preview of this tonight. Brooklyn small family business struggles, a great story. Premieres this Saturday, June 26, it's worth watching. "You can't wash out all the color and keep the flavor." Problem with our culture today, family restaurants being replaced with chain stores. We are becoming a nation of clerks, and our food is loosing its flavor! 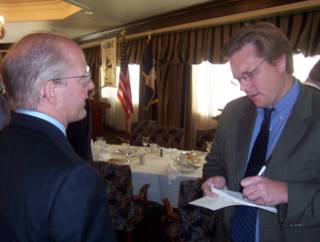 Bill Chrismer tells reporter from Denver Post that, "Schaffer clearly won the debate, and will win the primary election." Bill and Sen John Andrews are hosting a private lunch to benefit Schaffer with Congressman Pete Hoekstra, (R-MI) who will just be returning from Iraq. For an invitation email bill@chrismer.com or call (720)373-9678. 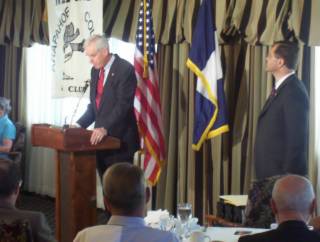 TIME.com: Meet Joe Blog -- Jun. 21, 2004 What makes blogs so effective? They're free. They catch people at work, at their desks, when they're alert and thinking and making decisions. Blogs are fresh and often seem to be miles ahead of the mainstream news. Bloggers put up new stuff every day, all day, and there are thousands of them....Blogs have voice and personality. They're human. They come to us not from some mediagenic anchorbot on an air-conditioned sound stage, but from an individual. They represent — no, they are — the voice of the little guy.