I'm trying Salesforce.com. Get a free 30 day trial for yourself using the link to the left. Let me know what you think of it, OK? Do you use a better contact manager?

Changes today at the Denver IDEA Cafe: I'm going to start encouraging people to come at 3 times, Watch/Do/Teach to Learn is going to become our new motto. Also, we're going to tweek the brainstorming just a bit, and put more emphasis on everyone sharing an Aha! moment, not just the announced speakers. I'll let you know how it goes.

IDEA Cafe is now listed in the Wikipedia article on "brainstorming." Meeting this afternoon, join us! More info and optional RSVP at http://ideacafe.meetup.com/1
Posted by John S Wren at 3/14/2008 09:20:00 AM No comments:

Microsoft Corp. Chairman Bill Gates said (today) he expects the next decade to bring even greater technological leaps than the past 10 years… (Gates said) some of the most important advances will come in the ways people interact with computers: speech-recognition technology, tablets that will recognize handwriting and touch-screen surfaces that will integrate a wide variety of information… The coming years will bring rapid changes in media as television increasingly becomes a targeted medium, where viewers can select niche content for news, sports and entertainment. “TV will be based on the Internet; it will be an utterly different thing. http://www.denverpost.com/breakingnews/ci_8560536
Posted by John S Wren at 3/13/2008 04:45:00 PM No comments: 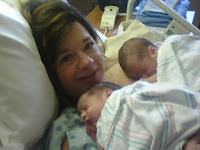 Here's a picture of my daughter Brooke and my new grandsons Tyler John and Jeffery Taisar taken by my son-in-law Ned Sisan. Born this morning at 9 a.m. in Houston.
Posted by John S Wren at 3/10/2008 03:45:00 PM No comments:

This gives me great hope: "If you're a singer you lose your voice. A baseball player loses his arm. [But] a writer gets more knowledge, and if he's good, the older he gets, the better he writes," said Mickey Spillane. Six of his books are now among the 25 top-selling novels of the 20th century, there are about 130 million copies of his books in print.

Want to know why newspaper readership is declining? Take a look at the Denver Post’s coverage of yesterday’s Denver Democratic convention. There were 5,000+ stories, all that the Post can see is Clinton and Obama. There is no mention of the many interesting, some even exciting, local races that those of us who attended saw. Shouldn’t Denver politics receive at least as much attention as Rockies spring training? http://www.denverpost.com/news/ci_8506556

Smart Reader Seminar - Making Money With The Denver Business Journal claims it the hour will increase your "Return on investment" by 8% over the next year. Should be worth at least the one drink minimum. This Tuesday (3/11), 3:30 to 4:30 p.m. at McCormick & Schmick's Seafood Restaurant 8100 E Union Blvd Denver, CO 80237 TECH CENTER More information at http://www.bizjournals.com/denver/calendar/?op=event_details&listing_id=26906&jst=m_cal_lk

The annual number of high school graduates in the United States will peak at about 2.9 million after a 15-year climb. The number is then expected to decline until about 2015.

Did you remember to set your clocks ahead one hour last night? Writing this I notice that the clock on my computer has been set ahead automatically.

I remember being in Iowa with a car full of wrestlers driving back to Mt. Vernon after a match, listening one the radio to farmers call in to argue that changing the clocks once a year would upset the chickens and cows. Now that we’ve done it comes the news that it makes our human life more expensive.

Rather than having leap year, why doesn’t the government just give us an extra hour each day in the summer? We could call it summer time. Or even better, how about an extra day each weekend?

Being with all the new volunteers and candidates at yesterday’s political convention here in Denver was exciting. I saw many friends, and the peak experience of the day was seeing Raul Rodriguez put the name of Lauren Montez into nomination in House District 5, and then seeing her get exactly 30% of the vote to get on the primary ballot without spending a dime.

Even if Lauren decides not to go forward with a primary race, she will have served as a gadfly to wake up the sleep state representative incumbent who will be term limited even if he wins.

That’s one of the big reasons I’m such a big supporter of our wonderful Colorado caucus-assembly system for nominating candidates for the primary ballot: It forces elected representatives to stay in touch or risk having a primary. Like the gallows the night before a hanging, the assembly focuses their attention.
Posted by John S Wren at 3/09/2008 08:27:00 AM No comments: