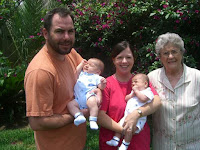 I'm just back from Houston, where my son John (left), my mom (right) and I visited by daughter Brooke (center), her husband Ned and two new grandsons, Jeffrey & Tyler!

“Once abolish the God, and the government becomes the God." "The whole modern world has divided itself into Conservatives and Progressives. The business of Progressives is to go on making mistakes. The business of the Conservatives is to prevent the mistakes from being corrected." G.K. Chesterton, who was born today (1847-1936) who wrote a book called The Everlasting Man, which led a young atheist named C.S. Lewis to become a Christian.


According to a recent study by the online women's blogging community BlogHer and Compass Partners, more than one-third of all women in the U.S. aged 18 to 75 participate in the blogosphere at least once a week. Of those women who are online any amount of time, 53% read blogs, 37% post comments to blogs and 28% write or update blogs.

Colorado is like a suburb of California's coastal cities now. It's like California's exurb. That growth in Jefferson County, in the suburbs of Denver, between Boulder and Denver, all of that growth there. Colorado had eight of 18 of the fastest growing counties in 1990. That's not all explained by Latinos.
Thomas Schaller, a University of Maryland political science prof in Newsweek interview.

I'm in Houston right now visiting my daughter Brooke, her husband Ned and new twin grandsons Tyler & Jeffry. Will be back for Socrates Cafe Thursday evening and IDEA Cafe on Friday, will bring pictures!