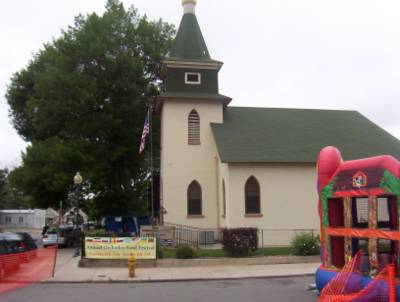 The 1st Annual Orthodox Food Festival was held today and will continue tomorrow (Sunday, July 25th) sponsored by Holy Transfiguration of Christ Orthodox Cathedral, 349 East 47th Avenue. Since 1898 the Cathedral has played an important role in the history of one of the largest ethnic neighborhoods in the State, as well as having imporance as a center of the Carpatho-Russian and Serbian ethnic immigrant communities, and as the earliest Orthodox Church in Colorado. See http://www.transfigcathedral.org/ 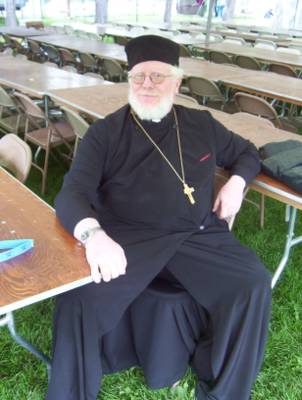 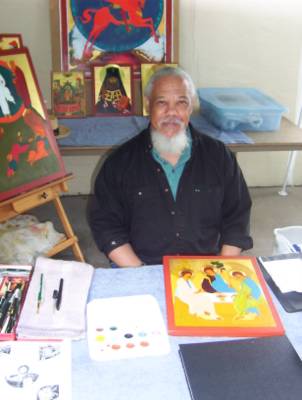 Gabriel Hayman is the pricipal artist for the Holy Images contained in Holy Transfiguration Cathedral. He has samples of his work and gives demonstrations of the various techniques and processes prescribed in the ancient Icon Painters' manuals. 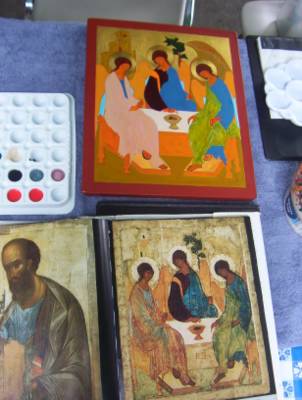 Hayman's latest work is The Trinity, shown here above a photo of the original. "I've been a pilgrim all my life, hospitality is very important to me," he said to me when I asked him how he was inspired to start this particular icon. 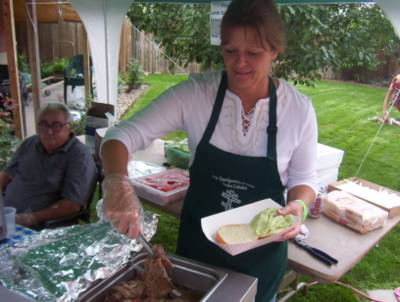 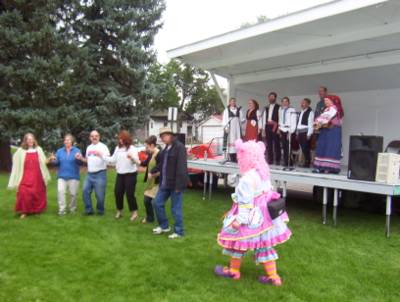 Les Bouffons (Ukranian Band), Planian Singers, and Barbell Fish Band (Balkan Band) played Saturday afternoon, the Tom Allen Band with Polka and Old Time Dance Band from 6:30 to 7:15 p.m. on Saturday. There will also be live music from 11 a.m. to 3:45 p.m. on Sunday... 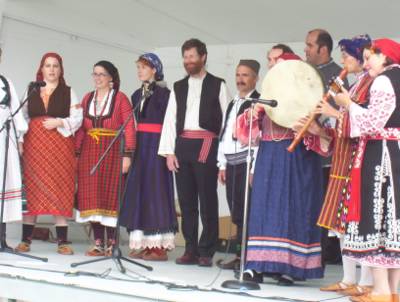 wonderful music plays through out the weekend: 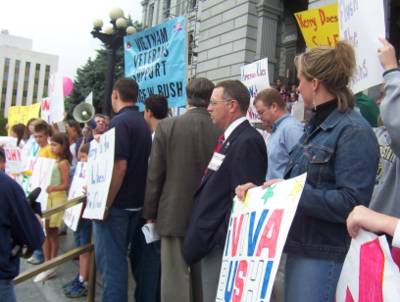 While John Kerry spoke in Denver Friday afternoon, supporters of President Bush held a rally on the West steps of the State Capitol. 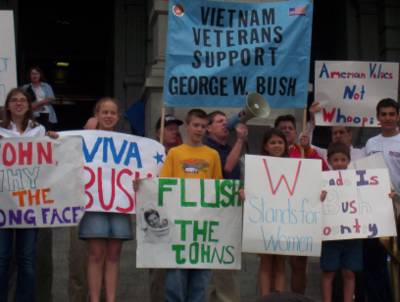 There was lots of enthusiasm for Bush despite the rain.

Colorado General Assembly - Representative Rob Fairbank Rob Fairbank, Majority Caucus Chair, gave the Denver Pachyderm Club an overview of the House races around the state. There are many open seats this year, and that creates a lot of uncertaintly. It is much more difficult for House candidates to raise money this year because of the restrictions created in 2002 by Amendment 27, so if you can Rob suggested you give the $400 maximum to your Republican House candidates. A 527 committee has been formed, and it will be supporting key House races with independent expenditures. The GOP has a 37-28 advantage now, after the election GOP seats could go up to as high as 40, or it may drop to 34, but in no realistic case should we loose the majority.

DenverPost.com - LOCAL NEWS: "I pledge to you today, as we embark on the second year of our administration, that we WILL move mountains to get the job done."

The mayor mentioned many projects that were undertaken during his first year: FasTracks, a Saturday morning tutoring program at a middle school, etc. But he fails to make a clear statement about: 1) his vision of the role of government vs. the role of private non-profits and business; and 2) given that vision his agenda for the next 3 years.

UNSTUCK - Diagnosing You're Stuck: "Do you think you might be stuck? Maybe it's only been for a day. Maybe it's a sneaking suspicion you've had for a while.
You've come to the right place! You've started to admit that you might be stuck.
So, what do you do with that admission? How can you cut through the fog, the politics, the loss of optimism that comes from hitting a wall? How can you move forward when everything seems to be heading in reverse?"

As I read through this interesting new book, realize this is what we've been doing at the IDEA Cafe since 1994, helping people get unstuck who are starting a new project, a new career, business, or campaign. Everything new starts from a stuck position!

U.S. Entrepreneurial Activity Increased in 2003 but Job Growth Lags, According to Babson College/Kauffman Foundation Study;: "These are the findings of the 2003 Global Entrepreneurship Monitor (GEM), according to researchers at Babson College in Wellesley, MA, who compiled the data from this unique study on entrepreneurial activity around the globe. The study was sponsored by the Ewing Marion Kauffman Foundation of Kansas City.
After two years of decline, entrepreneurial activity in the U.S. is bouncing back, increasing from 10.5 percent in 2002 to 11.9 percent in 2003, according to GEM."

Breaking Ranks - The Purpose of This Site: "Is pulling rank human nature? Sure it is. But history shows us, through changing attitudes toward racism and sexism, that opposing rank-based discrimination is not hopeless. If anything is human nature, it is the will to democracy, that is, the will to curtail abuses of rank by acting together to create systems of governance that circumscribe authority.
The first step is to become aware of rank as an excuse for abuse. As we become adept at distinguishing between the legitimate and illegitimate uses of rank, collective opposition to rank's abuses becomes possible."

The Golden Rule: "The golden rule is endorsed by all the great world religions; Jesus, Hillel, and Confucius used it to summarize their ethical teachings. And for many centuries the idea has been influential among people of very diverse cultures. These facts suggest that the golden rule may be an important moral truth.
Let's consider an example of how the rule is used. President Kennedy in 1963 appealed to the golden rule in an anti-segregation speech at the time of the first black enrollment at the University of Alabama. He asked whites to consider what it would be like to be treated as second class citizens because of skin color."

Millions Switch to Internet for More Diverse and Graphic News - Insight on the News - National: "Millions of U.S. residents are increasingly using the Internet as a source of news and images that are not available in the mainstream media, according to a recent report by the Pew Internet & American Life Project.

The study found that this switch to more diverse and sometimes more graphic information largely came about after the events of the Sept. 11, 2001, terror attacks and the war in Iraq.

Fast Company | Things Leaders Do: "When GE's CEO Jeff Immelt teaches up-and-coming leaders at the company's famed management-development center, he runs through a checklist of what he calls 'Things Leaders Do.' In an interview with Fast Company , Immelt reveals his own leadership checklist."

Fast Company | It's a Blog World After All: "Corporate America is jumping onto the blogwagon for many of the same reasons all those journalists, brooding teenagers, and presidential campaigners are already on board. Unlike email and instant messaging, blogs let employees post comments that can be seen by many and mined for information at a later date, and internal blogs aren't overwhelmed by spam. And unlike most corporate intranets, they're a bottoms-up approach to communication. 'With blogs, you gain more, you hear more, you understand where things are going more,' says Halley Suitt, who wrote a fictional case study on corporations and blogging for the Harvard Business Review . 'Even better, you understand them faster.'"

The New York Times > Opinion > Op-Ed Columnist: Sixteen Truthful Words: "Bush had spoken the plain truth. Did Saddam seek uranium from Africa, evidence of his continuing illegal interest in a nuclear weapon? Here is Lord Butler's nonpartisan panel, which closely examined the basis of the British intelligence:
'. . . we conclude that the statement in President Bush's State of the Union Address of 28 January 2003 that `The British Government has learned that Saddam Hussein recently sought significant quantities of uranium from Africa' was well-founded.' "

Rocky Mountain News: Opinion: "Which political party will command a majority in the 21st century? The answer is up in the air. Republicans and Democrats are steadily losing ground as more people choose to identify themselves as unaffiliated. In my generation - the so-called 'Generation X' made up of people born between 1960 and 1980 - almost half of all registered voters are independent. "