This photo says it all"


27 percent of children and 29 percent of adults had cavities going untreated. The level of untreated decay was the highest since the late 1980s… Since 1990, the number of dentists in the United States has been roughly flat, about 150,000 to 160,000, while the population has risen about 22 percent. In addition, more dentists are working part time...

Dentists’ incomes have grown faster than that of the typical American and the incomes of medical doctors. Formerly poor relations to physicians, American dentists in general practice made an average salary of $185,000 in 2004, the most recent data available. That figure is similar to what non-specialist doctors make, but dentists work far fewer hours. Dental surgeons and orthodontists average more than $300,000 annually.

“Dentists make more than doctors,” said Morris M. Kleiner, a University of Minnesota economist. “If I had a kid going into the sciences, I’d tell them to become a dentist.”


My dad wanted me to become a dentist. It seems like they make a lot of money, until you realize that the high end of their pay scale is less than what a rookie playing on any major league sports team can expect.
Posted by John S Wren at 10/12/2007 07:36:00 AM No comments: Links to this post

KGMC Ch7 TV posted their news story online. As you can see in the video, they call it a battle between David and Goliath. Forward this page along to your friends, encourage them to forward it along. Remember, David won!
Posted by John S Wren at 10/11/2007 10:19:00 PM No comments: Links to this post 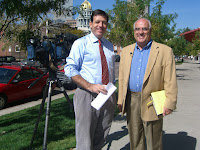 Steve Saunders just interviewd me for KMGH Ch7. He tells me it will air today (Oct 11)at 4 p.m. in it's long version, a shorter version at 5 p.m., and then possibly again at 10 p.m. On it I encourage people to attend our Ben's Chamber TGIF tomorrow (Oct 12) at 4 p.m. We hope to make this the #1 weekly networking event in metro-Denver, it's free and open to everyone, this should help us get off to a good start! RSVP if you haven't already at http://cocacop.meetup.com, OK? RSVP Yes/No/or Maybe for tomorrow, and you'll get a notice each week about special guests. Do you think Mayor Hickenlooper would join us next week?

Also, check out the Jim Spencer interview on Colorado Confidential. He's very negative about the Denver Tax/Bond proposal, it would be a great piece to forward along to your friends. If we all email our friends, we can defeat J-Hic's cash grab!

Email ThisBlogThis!Share to TwitterShare to FacebookShare to Pinterest
Have you spoken out? What do you think of this letter
I just sent to Denver newspapers:

Denver voters should send a clear message
with the ballots now being received in the mail.

Just like the hippies put women & kids up front in
confrontations with the police in demonstrations
in the 60's, Mayor J-Hic forms , staffs, and then
marches behind "citizen committees" which stifle
any organized opposition from forming.

Preschool kids, the arts, Denver teachers, a new jail,
have all been subject to J-Hic's "women & children up
front" campaigning. Is Denver better? No.

How well has J-Hic's "citizen committee" worked with the
homeless problem in Denver? Take a walk through civic
center park and decide for yourself.

$1 million has been amassed from those who will
get the $550 million from what has been called by
one concerned leader, "an alphabet soup grab for
cash." The million dollars is being called "a good
investment." This is an end-run around representative
democracy. It is Enron-style politics. (See article
from Denver Post, below.)

Wake up Denver! Stop the insanity! Just vote no on A thru I.

The campaign to pass a $550 million bond package and tax increase in Denver has raised $1 million in less than a month, mostly in large chunks from groups that stand to gain the most.

New ideas, speakers and seminars, along with some competitive entrepreneurial pitching, are all on the agenda at the third annual Naturally Boulder Days 2007: Building Sales, Brands and Authenticity, October 25-26, at the St. Julien Hotel, with the Naturally Boulder Task Force and the City of Boulder hosting the conference.


Medical research terrorism? Papers today are full of a research study that purportedly shows that a stressful relationship leads to a bad heart. Study itself is no where to be found on line, and Roberto De Vogle who did the research lists a string of other suspiciously propaganda looking research for the World Bank and others on topics like the relationship of income inequality and health. Did any of the reporters read the actual study? How do I get a copy?
Posted by John S Wren at 10/09/2007 11:44:00 AM No comments: Links to this post

Today over the lunch hour on KGNU AM1390 I went into the studio to give the reasons to vote NO on the so called "Better Denver" proposals, what Mary Smith our GOP Denver chair has called the Mayor's alphabet-soup cash grab.

A lawyer who was on the committee of "Denver's best and brightest" (her words, not mine) went on and on about what a wonderful thing the tax hike and increase in City debt will be.

I pointed out that "the best and the brightest" hadn't served us very well in the past: the Edsel automobile, Viet Nam War, etc. etc. The gave the reasons to vote NO:

1. Plan not well thought out. Lots of instances where plan only goes part way, voters will be left to pay more later. An example: the 3 new library buildings. Not enough money to finish the buildings, plan calls for more hand outs later, AND THERE IS NO PROVISION AT ALL FOR STAFFING THE 3 LIBRARIES!!!

2. The city doesn't do a good job now with the money they have. I'd intened to mention the park work in South West Denver that's been funded for nearly two years and the city just can get around to it!

3. Taking the wrecking ball to Boetcher Concert Hall is absurd. Build the same year as McNichols Arena, WHICH HAS ALREADY BEEN TORN DOWN. 30 years for building that should last centuries! The Rocky Mountain News Building on Colfax torn down to build the new justice center, they want us to save paper sacks and rubber bands and they tearn down good buildings left and right.

It's time to wake up Denver city government. Kick Hick, just vote NO!!

So it went something like this. Far as I could tell all the callers agreed with me.

I took Rick Nevin's "Vote NO" yard signs by the Denver Daily News and the Statesman Newspaper.

If KGNU posts the show on their website, I'll let you know.

Now, back to work. Forming the next Franklin Circle. Would you be interested? Email me at John@JohnWren.com.